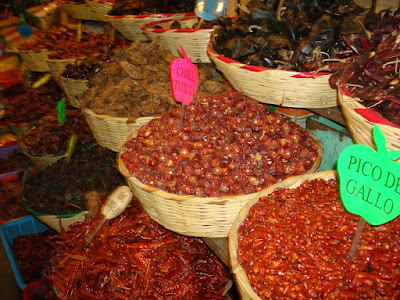 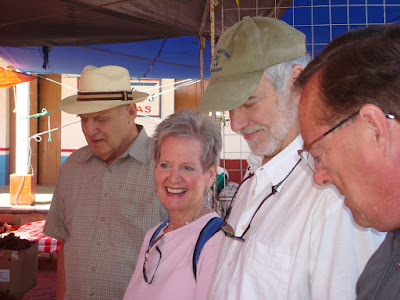 Another exciting highlight of this trip was our one day with Seasons of my Heart Cooking School. We were met in Oaxaca and taken to the market in Etla with our guide Yolanda who introduced us to the many details of a local market. We went stall by stall and tried many delicious items, especially the tamales. We tried about 7-8 kinds of tamales and then on to the local drinks - made with rice, corn, etc. She showed us the many peppers and local vegetables. Usually we pass most of these things and are afraid to try things so with a guide we knew which we could eat for safety sake and also which contained meat items that we might not want to try.Following that we went to a ranch in the middle of nowhere which was the large kitchen for the cooking school. There were 20 of us and we were separated into different groups so that we could spend the rest of the afternoon intricately cooking the many recipes. Of course after cooking, we all sat down to a delicious dinner. Our menu included: Panuchos (stuffed fried tortillas with topping), Crema de Chayotes (Chilled Chayote Bisque),Eggplant Salad, Grilled Vegetable Salad, Marinated Chicken (or mushrooms) wrapped in Banana Leaves and Ante de Mango (Layered Mango Pudding). We have recipes for all and hopefully someday will cook our versions of them for some of you readers....perhaps during our coming year long trip to Mexico. 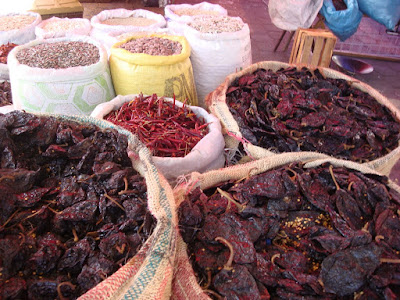 Another wonderful trip was to the town of Teotitlan de Valle where we visited with Benito Hernandex Contreras and his wife who have a farm where they grow the cochineal which is a parasite of cactus. These small "bugs" provide a most incredible red dye which is used for a natural dye in rug making. Benito grows, then dyes yarn and weaves using all natural dyes. This red dye was at one time more valuable than gold or silver for trading throughout Europe. We spent most of the day in this small indigenous village outside Oaxaca and happened upon the whole town at the small local church where they were celebrating "La Buena Samaritan" - good Samaritan and they passed out fruit water (calabaza)to all, including us 4 gringos. 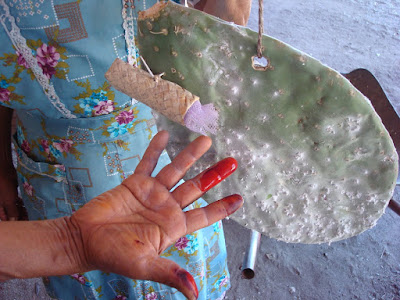 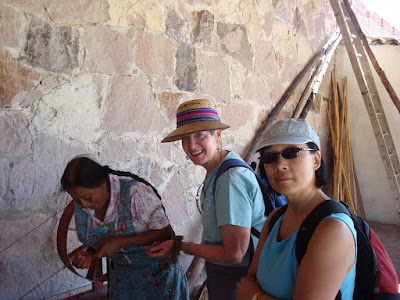 Here is Richard among the many entertainers on the zocolo in Oaxaca at night.

Then we headed back to Mexico City for our last few days. Richard and Mei Mei left on Sunday and we spent the day seeing various sites that were important in the new Barbara Kingsolver book, "The Lacuna", which I had been reading during this trip. This book takes place in both Mexico City and Asheville, NC - so interesting for me. There was much about Diego Rivera and Frida Kahlo and so we saw many murals including the one that was redone in Belles Artes after it was torn down at Rockefeller Center, NY for being too "socialist". We also saw the home of Diego and Frida in San Angel, a small artsy area of Mexico City. We managed to find our way all around town via public transportation which we really like and ate and some delicious restaurants.
All in all, a wonderful two week trip - time for family with Rich and Mei Mei as well as many interesting adventures.
Posted by Friends of plants at 9:57 AM No comments: 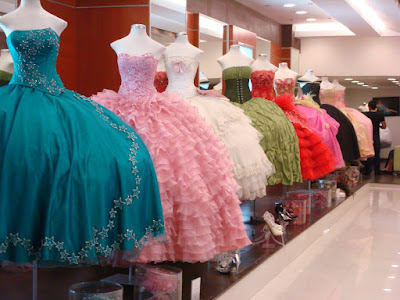 The second leg of our trip was Mexico City (called DF or Day Effa by the locals which stands for Districto Federales) and then to Oaxaca. Rich (my brother) and his wife Mei Mei met us in DF and we traveled by bus to Oaxaca (6 hours in the luxury bus with comfortable seats and movies in Spanish). We stayed in a wonderful hotel - Los Goliandrias (The Swallows) which had about 30 rooms all around beautiful gardens with lots of nooks and crannies for sitting outside to read. They had a lovely breakfast area so we ate there every morning. This was a great chance to try out many different restaurants, only repeating one twice. Oaxaca is a very clean city, different than San Miguel de Allende in its layout and style - wider streets and different style buildings. They have a very large "zocolo" or main square with activity day and night. We combined tourist activities and relazation. Main highlights for me were the ruins of Monte Alban, the Museo Regional de Oaxaca in the ex-convento de Santo Domingo Church, Tour of the Etla Market and Cooking Class with "Seasons of the Heart Cooking School" run by cookbook author Susana Trilling, and lastly our trip to a small indigenous town known for rug weaving - Teotitlan de Valle.

The beginning and end in DF included visits to San Angel, a small artistic neighborhood and many sites related to Diego Rivera and Frida Kahlo that we had not seen before.
More details... 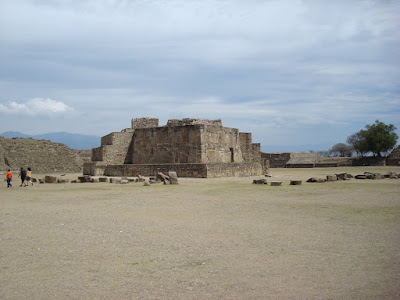 Monte Alban is a large pre-columbian archaeologica site inhabitated by the Zapotecans who were responsible for the distinct architectural stle and its rise to power. The city enjoyed two golden eras (around 100 BC to 100 AD and 600 to 800 AD) at which time Monte Alban's population had terraced the surronding hillsides to support a population close to 35,000. It had two eras of decline. The first around 200 AD and the second in 800 AD to leave it uninhabited. The reasons for this are unknown but they know that by the beginning of the 13th century a people who had long coexisted with the Zapotecans called the Mixtec began to expand their territory and that they reoccupied Monte Alban but did not add much to the existing architecture. They did leave, however, fantastic jewels and treasures in "Tomb 7" which we saw in the museum in the city of Oaxaca. It is facinating to explore the many ruins found in Mexico of the different peoples. 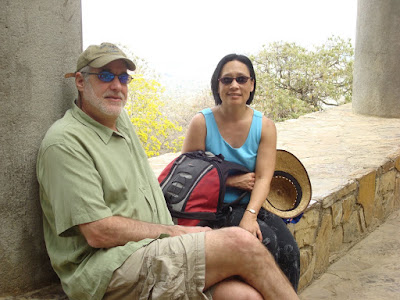 Posted by Friends of plants at 5:20 PM No comments:

March 2010 more about the butterflies

I have thought of a few more things to mention about the butterfly trip and also adding a few more pictures.

Please enjoy a few more of these pictures. On the movie - you will see a blank screen on the page and a little triangle in the bottom right corner of the movie screen which you can click on to activate the movie.
After leaving the first sanctuary, on the way to the town of Zitacuaro where we stayed, we passed through the town of Angangueo which is a tourist town during the butterfly season where many folks stay and arrange tours. This year there was a devastating rain storm for 2 days in e 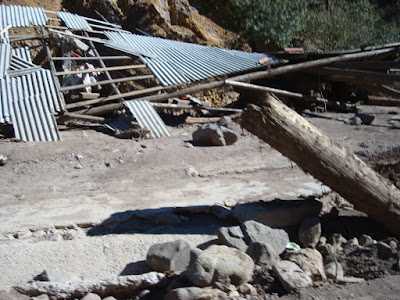 arly February (not the normal rainy season) and much of the town was washed away. We traveled through and I took some pictures. It is hard to imagine how they will recover but apparently the government has come in to help some and people are hoping to get the town back again to what it once was. This rain (and much cold) also had some effect on the butterfly situation which made it better in some ways for us - they were there a little longer this year. 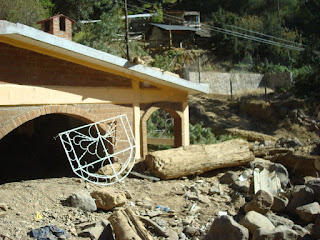 I also failed to mention the sound - when cupping ones ears we could hear the sounds of the butterfly wings in motion - an amazing sound.

This last picture is made of shells and china plates - amazing. It was in Mexico City. Every day and every corner of Mexico has interesting combinations of color and artifacts - a photographers dream. 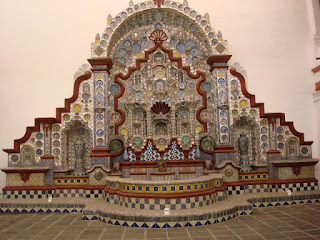 Posted by Friends of plants at 11:02 PM No comments:

March 2010 Visit to the Butterflies 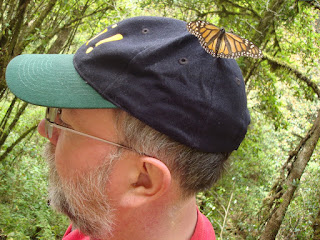 Today we are back from Mexico after a fantastic two week trip. I shall break up the posts and start with the beginning - our trip to the state of Michochoan to see the sanctuaries of the monarch butterflies. Here is where they winter from November to March, hibernating after their trip from Canada and northern USA. There is still so much that scientists do not know about these butterflies - for instance it takes three generations to come down to Mexico and so how do they know where to go since they have not been there before. They come down to the same area of Mexico every year. Towards March they begin to get ready to fly north again and we were there just at the time that many were flying down the mountain (by the thousands). Because of a rainy and a colder than normal February they were about a week behind the normal time which was perfect for us.
We flew to Mexico City and then took a bus to Morelia where we met up with our tour - Rocomar Tours (based in Canada). They were recommended to us by friends and we were very happy with this tour company. The group was 10 (including us and Paul and Phil from Rocomar). The first morning we had a great tour of Morelia by a local guide - Guilliame Moreno (Bill Brown). This is another beautiful city and we will probably go back and visit again sometime. Later the first day we met the rest of the group and watched a video about the monarch butterflies. We enjoyed the rest of our group very much - two young ladies from Colorado, Linda & Phil from near Albany, NY and Patti & Rudi from Texas. Having a small group for such a short trip was good as we had a chance to get to know each of our new friends. (A little plug for Linda Ford who just wrote a new book about the Wildflowers of Copper Canyon and will offer trips to Copper Canyon in the fall. Visit her website at: http://www.coppercanyon.wildflowers.com/ ) Maybe that will be another adventure trip for us.
Well I shall try to get back to the subject at hand.. 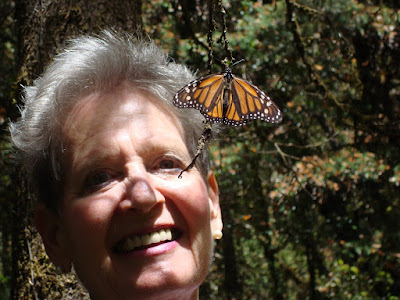 .the incredible, magical, spiritual mariposa experience. We spent one day at Sierra Chincua and the next at Macheros. The first was great and if we had not done more we would have been quite satisfied. But then the next day was beyond any possible expectations. I tried to capture these moments on still and movie shots and though I hope you will enjoy them, I cannot begin to explain in words how it was to be there among these many little butterflies.

Each trip involved a long hike up into the mountains (about 10,000 ft). We had the option of a horse to ride led by one of the guides. I took the horse down the first day but actually felt happier on my own two feet so I walked both ways on the second day. Each day included a cooked lunch by small local families right by the sanctuaries - one had locally caught trout for those who wanted it on an open fire. They made steamed vegetables for us.

Here is another video...the butterflies mating which they do in Mexico before the long fly north.

I would also recommend the following video to you who are interested - a PBS show that we saw in Feb. before our trip. http://www.pbs.org/wgbh/nova/butterflies/program.html
Here we are...two happy people surrounded by butterflies doing something that has been in our dreams for a very long time. Later I shall follow this blog with the next adventure with my brother Richard and his wife Mei Mei as we traveled south to Oaxaca...stay tuned. 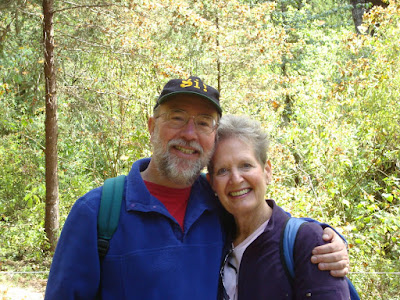