January 2012 - Back in San Miguel de Allende - an incredible week

Last Sunday started as a normal Sunday at breakfast with Barbara and David (we miss you Stan/Marcia and Kris/Cedric). Then we were off to the reception at my art show at Magenta Gallery. The show was hung and the guests were arriving. 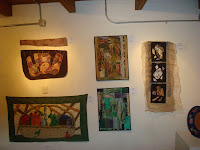 Then, out of the corner of my eye I saw someone who looked like my cousin Gordon from North Carolina and my mind started playing games....where was I, where am I and how could Gordon be here without me knowing about it.  Then behind him came Faye and I knew where I was...all I could repeat over and over was "OMG" and I was jumping up and down and so excited. The story is that when I sent out the email announcement about this show they both looked at each other and said "Should we surprise Susan and Richard?" and they decided at that moment to come on down to SMA and join the fun. Both of Gordon's kids - Greg and family as well as Michelle have been here.
So....what a great week it was for all of us. They stayed at a lovely B&B - Casa Maria and we managed to squeeze many activities into our busy schedule as well as delicious meals and breakfasts at Casa Maria.
The show was a great success and made us realize how many great friends we have here in SMA. Always fun to have our friends meet other friends.

Other activities during our first few weeks here included a birthday party for Jose - our Spanish conversation teacher and friend and a music event by VIP Orchestre with David Ziff playing his sax.
The week was also filled as we volunteered with our friends Ravi and Cindy for the first "Satsang Film Festival". Richard was the tech person every night to turn on the movie - the most important job and I took tickets several times during the week.

Here is a sampling of some of our activities for the week including some usual and some new....yoga (both), new database creation volunteer work (R), acting classes (me), art classes (both), exercise with personal trainer (me), gym (R), data entry volunteer work (me), meditation (R)...whew. No wonder I am tired at night. Still need to figure out when to include Spanish conversation into this schedule.  We have a great house sitting opportunity now and another one in mid Feb to the end of March.

Many of you are wondering about our future plans this year. Here is the scoop. We will be in Mexico till early April (with a few side trips) and then to USA for the month of April. We will head to Spain for May and June to walk the Camino de Santiago in Northern Spain. We are doing loads of planning and buying of lightweight supplies to carry in our new backpacks. Then back to US for July and back to Mexico for August. That is as far as the plan exists for the moment. Any ideas are always welcome for the future.

We are happy to be back "home" in SMA but we do miss all the friends we met during our travels in Ecuador and Peru. How blessed we are with so many swell "peeps" in our lives.
Posted by Friends of plants at 3:40 PM 1 comment: 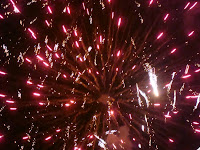 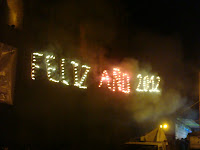 I am writing now from San Miguel de Allende but not wanting to leave out two outstanding events in Peru. We joined with thousands in the Plaza in Cusco to bring in the year. Yes, some were wearing yellow underwear (we presume). I found out that the tradition is that someone has to give them to you and that it brings good luck. Since I bought them for Richard I guess he will have the luck for both of us. We began to walk around the Plaza as the tradition is to run or walk around 12 times to bring luck for travels in the next year. We stopped halfway around as we felt like we would be trampled by many who seemingly had more than necessary to drink.
On New Years Day we had our goodbye lunch with Telma and Jean-Jacques which was a bit sad but we promised to see each other again in the future. It was the hardest part about leaving...saying goodbye to good friends, even though we were heading back to many equally great friends. I guess that is the life of the gypsies and I can see why many folks stay in one place with their friends so this does not have to keep happening. Later that day we took a 13 hour bus from Cusco to Nasca overnight and arrived early the next day. 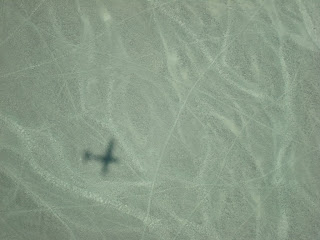 Nasca was an incredible place, not for the town which was nothing to see at all, but for the Nasca Lines. Here is information from Wikipedia about the lines. No one really knows to this date why they were made. Again in Peru...a connection to the past in ways that we had never known about before.
The Nazca Lines are a series of ancient geoglyphs located in the Nazca Desert in southern Peru. They were designated a UNESCO World Heritage Site in 1994. The high, arid plateau stretches more than 80 kilometres (50 mi) between the towns of Nazca and Palpa on the Pampas de Jumana about 400 km south of Lima. Although some local geoglyphs resemble Paracas motifs, scholars believe the Nazca Lines were created by the Nazca culture between 400 and 650 AD.[1] The hundreds of individual figures range in complexity from simple lines to stylized hummingbirds,spiders, monkeys, fish, sharks, orcas, llamas, and lizards.

The lines are shallow designs made in the ground by removing the ubiquitous reddish pebbles and uncovering the whitish ground beneath. Hundreds are simple lines or geometric shapes; more than seventy are zoomorphic designs of animals such as birds, fish, llamas, jaguar, monkey, or human figures. Other designs include phytomorphic shapes such as trees and flowers. The largest figures are over 200 metres (660 ft) across. Scholars differ in interpreting the purpose of the designs, but in general they ascribe religious significance to them.

The geometric ones could indicate the flow of water or be connected to rituals to summon water. The spiders, birds, and plants could be fertility symbols. Other possible explanations include: irrigation schemes or giant astronomical calendars.[2]

Due to the dry, windless, and stable climate of the plateau and its isolation, for the most part the lines have been preserved. Extremely rare changes in weather may temporarily alter the general designs. 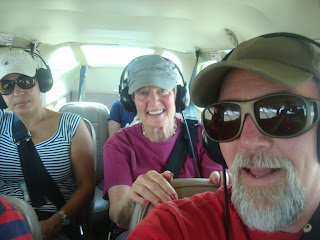 The flight over the lines in a small Cessna seated 7 people. Several (including Ricardo) did not feel well during the flight as the banking from left to right to allow for photos made it very uncomfortable. It was also really hot and we had not really slept well the night before on our long bus ride. However, putting that aside, it was one of the most interesting half hours of our lives. Here you can see the astronaut and the hummingbird (93 meters). 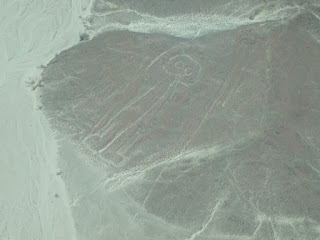 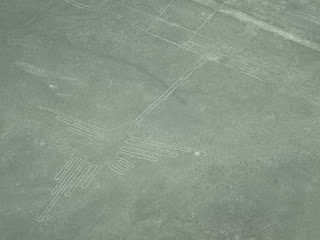 The next day we went to Lima and spent two nights. Also a chance to catch up with our friends Tess and Cathy and Pavel. We went Gaston y Astrid - a fancy restaurant in Lima serving fusion Peruvian food - they have several restaurants in South America and are working hard to bring Peruvian food to the world, with much success.
It was the warmest time we had during our 4 months and walked along the beach in Lima and as it was their summer vacation - many were enjoying the beach. 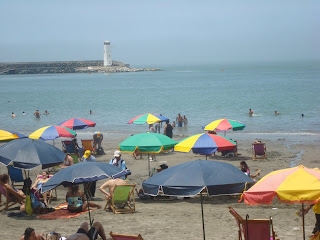 And now, we are back in San Miguel with our friends and our full lives. We felt great coming "home" and also so grateful for this last 4 months.
Thanks for coming on this trip with us and you will hear from us again but surely not as often as our lives here are more "regular". Happy New Year to all.
Posted by Friends of plants at 9:46 PM No comments: