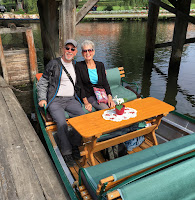 Here we are back in the travel mode again. We spent an action packed two plus months in the USA and we probably saw most everyone who is reading this blog post. We are grateful that we are able to spend this time reconnecting every year. Of course it is not the same as living near to you but it is our commitment to our decision to live away from many of you.

Now we are onto the next adventure. We are winding down our first ten days which we spent in Berlin, Germany. This will be a long post as I have much on my mind and also want to remember the many places we visited by photos and words.

I have such mixed emotions here in Germany, the land of my parents and all my previous generations. Coming from a German Jewish background gives me a connection to this county and it's history. If you know me well, you know that usually I am not that interested in either politics or history but here it is in the forefront of my thoughts. Berlin does nothing to disguise its past. There are museums, tour guides, monuments and much written about the wars, especially WWII and the Cold War. I was born just after the war and lived through the Cold War but never have I felt so strongly about the past than my time here.

You may have seen my facebook post with a picture of both Richard and I against a remaining part of the Berlin Wall using an expletive about 45 and about "No More Walls". I thought seriously before posting it (and will not repost it here) knowing that it was not really the word that I would normally use but after seeing the remains of a wall and learning about how the city was divided it made me think carefully about what it would be like if the USA were to build a wall. The problem is who is being protected from whom. I do hope that those who were offended by my post will accept my explanation and I might add that there were many, many more people who liked it than did not but I suspect there were many who did neither - neither liked nor posted their opposition. There you have it.

My general feelings about Berlin are that the people are very nice and friendly even to those of us that do not speak German. How I wish I had learned German when I was a young child from my parents. I think if we were to come again for a longer period of time I would try to learn some.
On average people are very tall, everything is clean and all the trains run on time. Berlin is a city with a complicated past and as I said, they do not hide it.

Having a good friend Tom here made the time special as he showed as around to places we might not have gone on our own. Travel is such a wonderful way to make friends. We met Tom in San Cristobal in Mexico two years ago and have remained friends along the way. We promised to come to Berlin to visit and glad we did.

Now to the many sites and visits during our stay. Having 10 days in one spot was great and we are very happy with our Airbnb choice in Prenzlauer Berg (Stargarder Strasse 57)- a hip area on the north side of Berlin. It is easy to get everywhere which we did mostly by foot but also learned the public transportation system as 10-12 miles a day was enough on some days. (We are in training for our upcoming camino in a few weeks.) 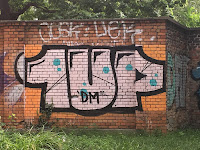 We did two walking tours - the Alternative Berlin tour and the traditional city tour. Each had a very different focus. Best about the alternative tour was my new understanding for graffiti or street art. It is all over town and our guide Penny explained the differences of what we saw. Tagging(letters), bombing (large letters on wall), throw up (big images on a wall) and heaven spots (created by hanging over buildings upside down). Once I realized that this is art posted on buildings with the desire to be seen which is really no different than many of us artists who want to be seen, even if just by a small subset of people in the world. I am one of those and you all know that I post things here and there of my little drawings - what is the difference between that and "tagging" on a wall! Of course the thrill factor is limited with my posting vs. hanging upside down and painting on a wall and trying not to get caught. Anyway, I will always look at graffiti with a different thought after learning more about it. There are many teams such as 1UP (One United Power) that post all over the world and you can see videos of them painting a train so fast between stops that they do not get caught.

On this tour we learned about many of the smaller neighborhoods around Berlin and walked to many of them. We visited Yamm (Young African Art Market) which is a fun Caribbean, african artsy place with food, venues for concerts, reggae music, etc. and also visited Urban Spree - another site along the river with alternative culture.

During the traditional tour we visited the Berlin wall, Checkpoint Charlie and learned so much history about E and W Berlin during the war and during the Cold War. Also to Museum Island, Brandenburg Gate and most interesting and moving - the Memorial to the Murdered Jews of Europe. We returned to that site another day to visit the Museum below.


Here is an explanation of the memorial from Wikipedia.
"According to Eisenman's project text, the stelae are designed to produce an uneasy, confusing atmosphere, and the whole sculpture aims to represent a supposedly ordered system that has lost touch with human reason. The Foundation Memorial to the Murdered Jews of Europe official English website states that the design represents a radical approach to the traditional concept of a memorial, partly because Eisenman said the number and design of the monument had no symbolic significance. However, observers have noted the memorial's resemblance to a cemetery. The abstract installation leaves room for interpretation. The most common being that of a graveyard. “The 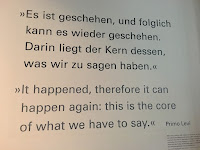 memorial evokes a graveyard for those who were unburied or thrown into unmarked pits, and several uneasily tilting stelae suggest an old, untended, or even desecrated cemetery. The memorial's grid can be read as both an extension of the streets that surround the site and an unnerving evocation of the rigid discipline and bureaucratic order that kept the killing machine grinding along.Visitors have described the monument as isolating, triggered by the massive blocks of concrete, barricading the visitor from street noise and sights of Berlin."

That evening we went to a museum in a Bunker of very the contemporary modern art collection of a couple named Barrows who live on top of the bunker in a very modern and fancy apartment.

Sunday we walked to Mauerpark - along with what seemed like half of the city to a large flee market and food/music spot. Seems to be the traditional summer Sunday activity. Noticeable is the fact that Berliners are always seeking the sun during the summer because their winters are SO long and SO cold. We are really very far north and weather would be like northern Canada.


That night we took a 3 hour circle boat tour all through center of Berlin, both E and W along the River Spree. Seeing the old and new parts of the city from the water at sunset was a completely different vision from the daytime. It also helped to see the size of this city which is the most populated city in Germany.

Next important visit was to the Eastside Gallery where there is 1K of standing wall which has been painted by people from all over the world. Each is identified and it is the art that I referred to above with the controversial reference to the US president and "No more walls!"


We went to Potsdam which is on the outside of town and city of the German Kaisers with large castles and gardens and the site of the Potsdam Conference in 1945 where Truman, Stalin and Churchill gathered to decide how to administer the defeated Nazi Germany and how to establish post war order, peace treaty issues and countering the effects of the war.

During our stay we watched the 2015 Steven Spielberg movie "Bridge of Spies" about exchange of two Americans (Gary Powers U2 pilot and Pryor, a young graduate student and  Rudolf Abels a Russian spy. The movie took place on a bridge between Potsdam and Berlin that we walked across - it was good movie about the Cold War.

After all this history it was time to relax and we went with Tom and his friends to lake Liepnitzee for swimming and relaxing. They biked and we walked, getting lost on the way to find them and thanks to my Iphone and google map app we eventually did. My world has changed with the ability to find things so easily with this phone. 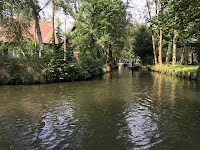 Friday took us to Spreewald - by train to Lubbeneau and then a 2 hour "pont" boat trip through the small canals visiting this small village where the only industry besides tourism is pickles and schmaltzbrot - bread with chicken or goose fat spread. Needless to say, Ricardo had it without schmaltz!

Thanks for following my long travelogue - helping me to remember this trip.

Now for a few words from Richard:

Where can I begin about a city that is so progressive in nature that it would make a perfect model for any other town or city that wants to make their world a bit more magical. I can only think that the past was so grave that they wanted it to be totally different and in this way they have succeeded greatly.
The parks are always within walking distance and people ride their bicycles around town. For a city of 3 million you hardly see any traffic and most people follow the laws with little desire to find shortcuts even when crossing the streets. People do have cars and very nice ones but only seem to use them when necessary. There are many cars but they are parked and seem in very good shape.

Being a vegetarian and Susan a vegan the options for good eating in this style abound in every restaurant. Most people here seem to eat many of their meal outside and I can see why. We enjoyed many wonderful meals out in this city.  In Berlin sampling the great food options is a big part of being here. (See Susan's blog post on food in Berlin at: http://vegan-food-adventures.blogspot.de/2017/)
We came here primarily to visit with our dear friend Thomas who lives here and with great joy have found another place that we could easily live very happily.
The German people here in Berlin are very tall and seem health conscious not to mention friendly. English is spoken wildly by the young but when possible a German word or two is appreciated. We feel very much at home and I know that we will return again to Berlin in the future.  I could say more but I know that Susan has covered much of the trip details. I recommend this city to be put on your bucket list.
Sending love always, Ricardo