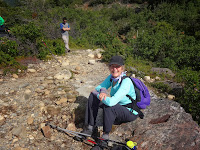 Wow...this was an amazing trip and very difficult to summarize in words or photos as the grandeur was beyond them both. Ricardo and I have spent some time thinking about the trip as we are now back in Mexico after a 2 night red eye trip. Patagonia is FAR away! Though I am writing, there is a mixture of both of our thoughts on this trip. You will see some of the many scenery photos that I took. There were 360 degrees of mountains with snow and beautiful skies to photgraph.

Here are a few facts...we were a group of 19 hikers, 23 runners and 4-6 guides at various times. The owner of Andes Adventures, Devi was with us all the way as a runner, and his guide, Abelardo from Cusco was with us the whole time as well. At different times in Chile and Argentina, especially in the national parks, we had local guides. We were in 3 different national parks, hiked close to 60 miles, were together for 17 days, stayed in hostels with 6 in a room (3 bunk beds) in Torres del Paine National Park, visited the towns of Punta Arena, El Calafate, El Chalten, Ushuaia (southernmost city in the world) and lastly in Buenos Aires for 3 days. We traveled by bus, plane, boat and by foot. In fact, the only option in Torres del Paine National Park was by foot from hostel to hostel. 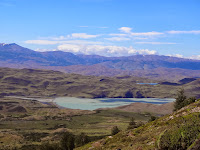 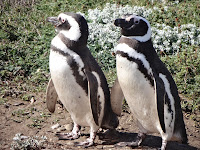 We were a bunch of 42+ people with a mix of marathoners, ultra marathoners, hikers and walkers in various levels of fitness. Everyone had different goals or ideas of what they wanted to do each day. Although most were well traveled and knowledgeable on what they like to do, we all followed the lead of the guides since we were in their care in this wild and wooly place. It was interesting to watch this large group morph from folks who did not know each other at all, to a close knit family by the end. And where did we fit into this group? Ricardo is funny and friendly to all. I am quieter and tending to my own needs...physically, especially. Richard feels that what is most important to him is to be a part of the group however at times he enjoys being alone with nature and his own thoughts. I loved watching him joke around with everyone, help folks who needed help and just enjoy the company of the group. He says that he is very proud of himself that what comes out of his mouth, more and more, is a type of Spanish that can allow him to develop friendships with Spanish speaking people, like the guides on this trip. He often uses his Mexican Spanish expressions and gets a good laugh from everyone. We were some of the few who did speak Spanish on this trip. 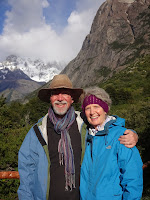 Weather...
We had all 4 seasons in an hour, half day or day with only one day in a short sleeved tee shirt and this was their summer! Many days we had layers of clothing and hats and/or gloves on and off all day. The wind was the strongest I ever experienced....almost all the time. If there was only one word to describe the weather I would use "WILD". 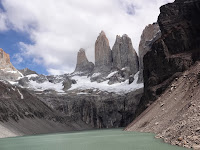 Food... It was not difficult to be a vegetarian but hard to be a vegan especially not eating wheat. I did manage most of the time with lots of nuts and fruit. All our meals were included in our tour and many days we had box lunches to carry (lots of cheese sandwiches for Ricardo). We drank water right from the streams. We asked many many times if it was OK and always got the same answer- yes it is fresh and fine for drinking. I tried a berry from the Calafate bush - if you eat them, you will return to Patagonia. We met a women who was eating dandelion leaves from the wild in her salads as well as other fruits and berries she found along the way. Most of the restaurant food was good and meat eaters loved the piles of lamb and beef that were served in both Chile and Argentina - especially in Buenos Aires. Devi did take good care of the vegetarians and got us special meals in each of these places. 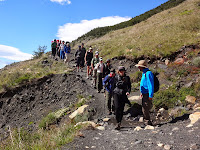 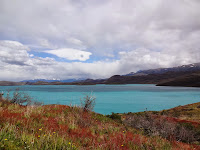 Hostels vs hotels. We like the camaraderie of hostels. We had 5 nights in hostels with 6 in our room. There was no other way to get between them but to hike. This was a huge challenge for me as I developed some knee problems after the very hard first day which got worse the next few days. We were in Hostel Torres, Los Cuernos and Paine Grande (all in Torres del Paine national park). Hotels were more comfortable and of course, nice to be on our own. I found it challenging to always be with so many people...especially at meal times, in restaurants. The noise level was high, and we could only sit with a few to talk. As we were traveling together between places on buses, boats and planes, we were always part of a large group. Day by day the group grew closer and closer. It was a bit sad saying good bye to each other at the airport and at the hotel in Buenos Aires. There are a few we will hopefully see again somewhere, sometime. These are all very adventurous travelers so it will not surprise us if we catch up again. Maybe a few will come and visit us in San Miguel de Allende. 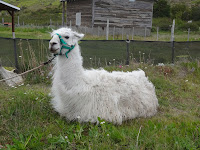 People are very friendly In both Chile and Argentina. There were many, many hikers from all over the world. All the hostels in the national parks were full. This was not only the holiday season, but the beginning of their summer vacations. We had a big Christmas dinner at the hostel on Christmas Eve and celebrated New Years in our hotel in Ushuaia though everyone did not stay up till midnight. We also celebrated our 23rd anniversary on Dec 30th. On New Year's Eve we met up with my sister-in-law Mei Mei's cousin Nick and his wife Tracey who were on a different hiking trip and we knew we would be in the same place at the same time....small world for sure.


Tour traveling...for us the tour traveling is good, especially for all the logistics. I think we were slightly over our heads for this type of hiking and I think in the future I will do a bit more checking before signing up for a big adventure of this type. I am more of a walker than a hiker. There were many ups and downs, uneven terrain, boulders to climb over on the first day, rivers and mud, etc. I developed a very sore knee on the first day which made downhills very uncomfortable and slow for that day and the next few. It was better by our last day of hiking. We were very happy with Andes Adventures with their great guides and so very well organized.


Wow moments - glaciers, mountains, wild flowers, Torres del Paine, penguins, sea lions, foxes, guanacos (from the llama family), color of lakes...aquamarine which seemed like they were painted (from the minerals in the glaciers), soothing colors, sitting on rocks and meditating, wind in our face, leaning into the wind and not falling. I had one moment when the wind was so strong I had to kneel on all fours alone on a corner as I turned and the wind was so strong I was afraid to move. I could not call ahead to Deborah. I thought it was a long time and thought about how people would freeze to death in the really cold weather. I was not afraid as I knew the wind would pass but it was a bit scary. For Christmas eve we were gifted with a complete rainbow! 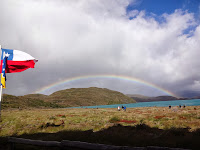 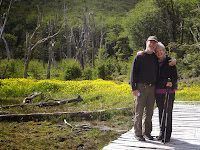 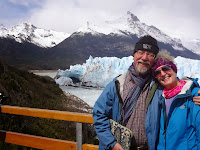 What did we learn? I learned that I am a walker, not a hiker. Sometimes it felt like a really bad joke...every time we asked how long someone told us 10-15 minutes and it was more like hours. Also the terrains were described as rolling up and downs but that was not how it seemed to me. Is this a lesson? Perhaps not to ask questions and to experience the moment, but when suffering in discomfort, that is hard to do. We have connected with mother nature and magnificent scenery. We learned about glaciers and land created by glaciers. Both London and Torres de Paine are at about the same latitude (50) yet the climates are so different...as a result of the strong winds in Patagonia. On the boulder field on first day our guide told us that each year when he comes it is different as the wind blows and snow move the rocks. It would be nice to be more knowledgeable on weather. Richard wants to study more about geology. We saw a differences between the management of the parks in Chile vs. Argentina and the differences between the private sections of the park, and the public sections. The public sections were much better maintained.

I also learned to STOP making comparisons. I spent a bit of time in the beginning comparing myself and my hiking abilities to this elite group of folks till I finally realized that comparisons are worthless...as they are only a moment in time and there is nothing to compare among us all in these ways. There are always better and worse, larger and smaller, smarter and less smart and I never compare others to me, so why would I want to waste another moment comparing myself to others. This was a big lesson for me.


We spent the last few days of our trip in Buenos Aires. It is a large and beautiful city and would have been nice to have more time to explore. We chose to go out ourselves one night to one of the BEST vegetarian/vegan restaurants we have ever been to - BIO. We recommend it highly.


There were a few amazing events as well that happened during our travels. You all know that I am good at connecting and since we had a few days in CA before heading off to Patagonia, we had a chance to see our friend Tom who I know for over 30 years. It was nice to catch up and decorate his tree together.
Then we met 4 of the group of travelers from our Inca Trail event at the LA airport the night before we left. Then we headed to Glendale CA to meet Jackie and David Gish. We had connected this summer over many emails about our large family tree - of the decendents of 16 children born in Frankfurt. Then we met another relative in Buenos Aires on our last morning there. I suspect that we will meet more and more of our relatives as we discover their whereabouts.
We both want to wish you a VERY HAPPY NEW YEAR and are grateful for your traveling with us on our special adventures. We feel so fortunate that we are physically and financially able to take such incredible trips.
Posted by Friends of plants at 4:40 PM 4 comments: