﻿﻿﻿﻿﻿﻿﻿﻿﻿﻿
﻿﻿﻿﻿﻿ ﻿﻿﻿﻿﻿ ﻿﻿﻿﻿﻿﻿﻿﻿﻿After spending one night at an airport hotel in Mexico City we flew to Bogota, Columbia, Quito and then on to Cuenca, Ecuador. I had done lots of reading during the flights from our Lonely Planet Guidebook and knew that we were flying over volcano areas and was amazed to see this sight - Vulcan Sangay which is over 15,000 feet. Here you see it above the clouds from our plane. Now we are even more excited to visit some of the volcanos in the national parks here in Ecuador. Following a good night sleep we headed out he next morning to see some of the sights of the town. There is really so much to see and do - many museums and churches as well as plazas, shopping and a beautiful river running right through the town. Actually there are 4 rivers and hence the original name given by the Incas of Tomebomba which means many rivers. Here is just one of many views from the river looking at the houses along the Barranca - ridge above the river. It is a very clean and cosmopolitan city with flat stone streets which are much easier to navigate than San Miguel. Sidewalks are also much wider. The people before the Incas were the Canari people and there are still decendants of these people living in Cuenca and the surronding areas.

﻿ We took a tour bus around town to get the lay of the land and find out all the places to return by foot. A fantastic view from Turi - the Mirador above the town showed the large size of this city - somewhere between 300 and 400,000. There is so much to see and we are trying to pack in some before the beginning of our classes which start next Monday, Jan 31st. We are also all set for our homestays beginning Sunday. Our houses are just a few blocks from each other and within a 20-30 minute walk from school. I am nervous but excited for that part of our adventure.﻿
﻿ ﻿Back to Cuenca. Right by the river, right in the middle of town are ruins called Pumpungo which were Inca ruins. It is always amazing to see such ancient history in the proximity to modern times. Tomorrow we are off to the largest Inca ruins in Ecuador - Ingapirca and I shall write about that in the future. 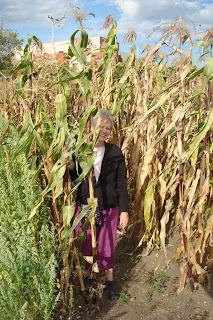 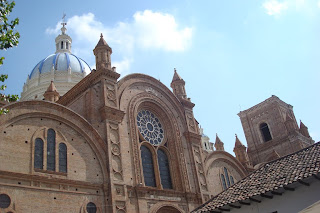 There are many churches in town and during a bus tour we heard the driver say that you could go to a differrent church every Sunday for a year without repeating. I don't think it is on our "to do" list but we may at least visit a few. The inside of this large old church on the main Parque Calderon has an alter all in gold and silver.﻿ It is one of the largest churches in all of Latin America.﻿﻿﻿
﻿
﻿﻿
These next pictures are from our trip today to Parque Nationale de Cajas - about one hour away from Cuenca by local bus. Our 2 1/2 hr hike was around this lake with all kinds of beautiful scenery and a variety of plants, trees, flowers - distinctly different than city life. It is a 'must see' and I am sure we will go back for several of the other hikes. I had wanted to visit all the National Parks in the USA but now will have to add some more as this was just amazing. Like our National Parks - there are well planned hikes and rangers to explain them all. Many take guides for the more complicated hikes and we may do that in the future.
﻿ ﻿

Here is a typical Cuenca indigenous woman - called Cuencana's and they dress in this white hats and skirts with different embroidery at the bottoms which represent their home areas.
﻿ ﻿﻿﻿﻿﻿﻿﻿﻿﻿
Posted by Friends of plants at 9:40 PM 1 comment:

January 2011 - the year end and the new year begins

﻿﻿﻿﻿﻿﻿﻿﻿﻿﻿﻿﻿ ﻿
We celebrated our 20th wedding anniversary on Dec 30th - going out to dinner to "El Tomate" and then a very different New Years Eve than our many past ones - usually we celebrate with friends at the beach - often a quiet night. This year we had big fireworks at the "jardin" to bring in the new year. It was the finale to a big December with guests every day which was wonderful but I would by lying if I did not admit that I was quite tired by the end.﻿﻿ 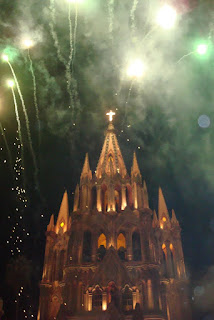 We left early on January 1st in a rental car to the town of Xilitla, MX which was about a 6 hour drive through windy mountain roads from San Miguel. We went with our friends Bob and Marybeth Bates and both hombres did the driving. Though it was a rough ride for the stomach - it was SO very worth it for the sights both along the way of the mountain scenery and for the final destination - Las Pozas which is outside the town of Xilitla.

(From Wikipedia) Las Pozas ("the Pools") is a sculpture garden built by Edward James, more than 2,000 feet above sea level, in a tropical rain forest in the mountains of Mexico. It includes more than 80 acres of natural waterfalls and pools interlaced with towering Surrealist sculptures in concrete.


Las Pozas is near the village of Xilitla, San Luis Potosí, a seven-hour drive north of Mexico City. In the early 1940s, James went to Los Angeles, and then decided that he "wanted a Garden of Eden set up . . . and I saw that Mexico was far more romantic” and had "far more room than there is in crowded Southern California”. In Hollywood in 1941, his lifetime friend and cousin from Paris, British born Magic Realist painter Bridget Bate Tichenor encouraged him to search for a surreal location in Mexico to express his diverse esoteric knowledge. In Cuernavaca, he hired Plutarco Gastelum, then a young manager of a telegraph office, as a guide. The two found Xilitla in November 1945. (We stayed at the hotel which is owned and managed by the daughter of Plutarco.)

Between 1949 and 1984, James built thirty-six concrete follies - palaces, temples and pagodas, including the House on Three Floors Which Will in Fact Have Five or Four or Six, the House with a Roof like a Whale, and the Staircase to Heaven.There were also plantings and beds full of tropical plants, including orchids - there were, apparently, 29,000 at Las Pozas at one time - and a variety of small casas (homes), niches, and pens that held exotic birds and wild animals from the world over. Massive sculptures up to four stories tall punctuate the site. The many trails throughout the garden site are composed of steps, ramps, bridges and narrow, winding walkways that traverse the valley walls. Construction of Las Pozas cost more than $5 million. To pay for it, James sold his collection of Surrealist art at auction. James was a friend of Dali, Magritte and other surrealists. I have included several pictures of our time at Las Pozas and have many more for those who wish to see them. 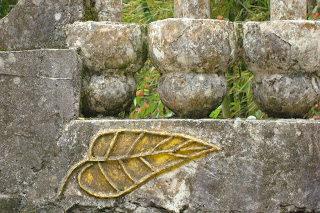 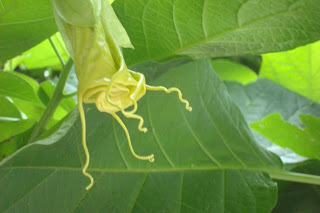 Now we are winding down our time here and getting ready for our travels to Ecuador. We leave on Jan 23rd for Mexico City and then on to Cuenca, Ecuador. This month is filled with spanish study, especially for me. I figure that I should cram as much into my brain as possible before I start my immersion experience.
I suppose that my next post will come to you from Ecuador....will have to change the title of our blog to something else during those upcoming 7 weeks!
Happy New Year to all and much love.
﻿ ﻿

Posted by Friends of plants at 6:17 PM No comments: