I am going to take some time to review the weekend with author Francisco Jimenez ("Panchito") and the project called "Libros sin Fronteras". Many of you already know a bit about this as you have been supporters, volunteers or donors. It all began about one year ago when a few of us in our Spanish conversation class who had been reading the three books by this author decided that it would be a great idea to start a project of literacy in Mexico and invite Panchito to come to SMA. I decided to write immediately and he quickly responded that he would love to come. That began our project and many of us have worked very hard to involve Mexicans, and especially to attempt to get young Mexican children to read (and own) a book. The program morphed over the last year from circles of reading with adults, more to working with children.
Over the summer we did a crowd funding program online (indiegogo) and thanks to many of our friends and family we raised sufficient money for much of the expenses and then also sold books to some, and gave over 200 books to children in SMA and several surrounding communities. 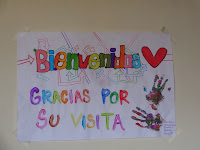 Here are pictures of the many events over the weekend. I am going to list them as they occurred along with my thoughts and feelings. First I will have to say that having read these books and coming to know Panchito and his moving childhood before meeting him had me wondering what he would be like and would our event be a success....would people actually come, would the children understand this project from their point of view - many being poor like Francisco and wondering if their lives could ever change. I have no doubt that many, both young and old, were moved by his words and his message.On our bookmarks he had me put: Reading is Power and that was a strong part of his talk - Reading and education are the keys to the future of each and every one of us - no matter what our age. We are never to old to learn something new.


Thursday, Nov 14. At the moment that Francisco and Laura arrived, we whisked them away to a small community in the campo  (outskirts) of SMA called La Palma. There is an organization called The Rural Education Institute of Mexico, Inc. (www.ruralmex.org) which runs several programs in this community for children who are provided life skills to better their future. These 25 children had all read the book "Cajas de Carton" and had individually prepared questions to ask Francisco. As he arrived, he went around the room and shook the hands of each of the young people with a few words for each of them. 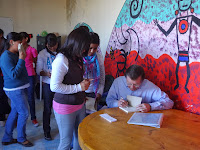 This was moving for me, seeing them wide eyed with their books in their laps ready to listen. Was this the first author they had ever met - I suspect yes. He spoke to them about his life, his parents, the things he learned from the two different cultures and answered every one of their questions and he signed each of their books.

That evening we went to our favorite restaurant  - Los Milagros with them and Jose Roque, my Spanish conversation teacher, and one of our team.

Friday, Nov. 15. First on this day was a meeting with all present and former students of Jose Roque who had all read the book in Spanish. It seemed that we have been waiting and talking about this visit in our classes for quite a while (we have even moved on to other authors) and so we were all excited for this day. It was a packed room at Sala Quetzal in the Biblioteca and the whole talk was in Spanish. I was reminded and also heard the same from others - we have all come a long way in that we were able to just attend and listen in Spanish to a detailed talk with lots of emotion and understand. For many of this it was a dream come true to be able to do this. Again, he talked for a while, answered many questions and signed books. The impact of his talk to me was about "roots". It does not matter where we come from or who we are, we must never forget our roots. His suggestion (which he does in his classes) of people interviewing their parents and grandparents in order to keep the history alive touched me. It is now too late for me, but I will look at my own family roots and history (as I too am a child of immigrant parents) differently and not just forget. One of the main reason he wrote his book was for his family as well as all people who have roots in different cultures - learning to live together in one world.

Afterwards he went to Juan's Cafe to attend a small conversation class with Jose.

Friday night was the main event at El Sindicato. Again a full house with many arriving early to get a good seat. With a slide presentation of many pictures of migrant working situations, the Tent City where he and his family lived and stories of pain and joy in his life. He is so open about his feelings.
The following, from a friend, sums up the night for her, and I am sure for many others:

It was one of the most interesting forums we have attended. Like a number of people in the audience, I grew up in CA and had contact with migrant families both in childhood and (much later), adulthood. Consequently, it was utterly fascinating to hear his story and reflections, especially in light of learning more about Mexican culture by living here.

It's interesting how one begins a project with one focus, in your case a focus on literacy, and it ends up being that and so much more. Jimenez's conversation embraced migrant rights and social justice; the importance of education; opportunities for upward mobility in the U.S., our mutual responsibilities to each other; the contribution of farm workers to society at large; and cross-cultural differences/considerations between the U.S. and Mexico, to name a few.


And the BONUS was we got to practice Spanish comprehension! 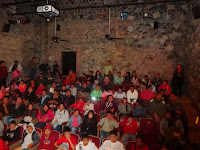 Saturday, Nov 16. This was a big day for the kids. It started with a standing room only audience in the Santa Ana theatre filled with children from San Miguel Viejo, El Huizachel (with their moms....we sent a bus to pick them up early in the morning) and many from the local schools in SMA. I counted over 120 kids. This presentation also included some slides and discussion again about reading, education, respect for parents, respect for all types of jobs, lessons of love, hope and prayer from his mother and the discipline of work from his father. This was another emotional event as I kept looking at these kids listening with hope and imagining that even if we touched just a few of them to know more about reading and education that the whole project was worth every moment. To think that each of them now has their own book and has read is awesome. This too was a bi cultural event - one of our goals, and not just the two cultures, but a mixture of generations as well since some were there with teachers, mentors or friends and family. 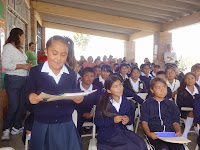 Later that afternoon we headed to Los Ricos, the event that was supposed to be on Thursday morning but was changed due to airline problems getting Francisco and Laura to SMA on Wed night. This is another community that is supported by many Norte Americanos who help with their afterschool reading and English program. Their teacher Lucha and her brother who is the Director of the school in Santilla brought together the two schools, all in uniforms, patiently waiting for our arrival. This small building has a classroom, a library, a small computer lab, a garden and kitchen. These children too had all read Cajas de Carton and most of the kids had written detailed reviews of the book, chapter by chapter with drawings illustrating their thoughts. All were given as gifts to Francisco. Many also gave him pennies (which happened at several events) and little tiny notebooks - all significant memories of chapters in his book.  One note to Francisco (in Spanish) told of how disappointed the young boy was when he heard that Francisco could not come on Thurs that he cried, and then when his mother told him that he could meet him on Saturday - he jumped for joy. 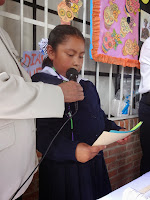 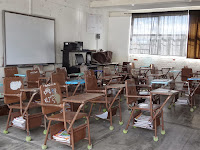 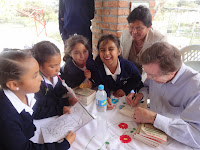 And we topped it all off with a great fiesta at Liceo de la Lengua on Saturday night - it was fun with a band, dancing, botanas, drinks and a great end to our incredible 3 day program. The following morning a few of us had breakfast together and then we sent Francisco and Laura off to explore the streets of San Miguel. I know for sure they will be back soon - we loved them and they loved us and our beautiful SMA.

So, all in all, a fantastic weekend. THANKS to all our supporters, sponsors, family and friends. We think that there were close to 500 who attended the various events, we purchased about 335 books and gave away 225. AND, thanks to everyone we covered all our expenses and we have an extra $200 to go towards next year's Libros sin Fronteras events. We are already thinking about what is next....anyone with thoughts or ideas - send them along.
Most thanks go to Francisco and Laura for a wonderful weekend.

Posted by Friends of plants at 7:30 PM 3 comments: