We're "Down Under" in Australia

Another country for us and a different world. We left the motor home life to enter the life of beautiful homes, reconnecting with good friends that we met traveling the world.

Our first 10 days were in Melbourne, on both sides of the city. First we were with Anne and Michael who we met in Portugal, walking the Camino from Porto to Santiago in Sept 2017. We've stayed in touch via technology and a year ago made plans to walk with them on a pilgrimage in Japan. Once the plan was made, we decided to add NZ and Australia, and then Spain beginning tis long trip.

As I write, we are up in the air about Japan - will the country be closed because of the Corona virus? Will the trips be cancelled? Will we cancel in order not to be stuck in Japan? Don't know - perhaps I will answer this before publishing the blog and perhaps not.

Anne and Michael have included us in their lives as family and we have continued talking, walking, eating, laughing, singing, playing games and just living together. We have bonded as the "besties" that we called ourselves when we met.

We concentrated on two themes during the first few days - The indigenous - the Aboriginal Australians and the animals of this continent. We started with the Aboriginal Tour in Royal Botanical Gardens with our guide Jacobi who introduced us to the culture and the local plants. At his suggestion we went to the Koorie Heritage Trust in Federation Square learning more about the culture and some of the Aboriginal art. I am quite taken with the details of this art and their design and color elements. We also visited the Marlborough Museum seeing the "First People" exhibit which was excellent and more aboriginal art, both traditional and modern. At the museum we saw an IMAX movie about animals of the Northern Territory. The museum was in the area of Melbourne called Carlton and we had dinner at a vegan restaurant that has been around for many years and delicious - Shakahari.
Note: Just like NZ, there are amazing restaurants always with vegan and gf options noted on their menus. The world is changing in that the options are so plentiful.

We also visited the Heide Museum of Modern Art and sculpture garden with Anne's son Erin his daughter Nive, (2 years old). Visiting places along with being with family is a wonderful way to experience more of the culture than just being a "tourist". We are grateful for our friends. 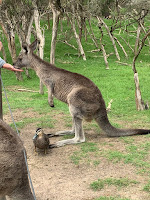 Now to the animals - on Bonds Road in their neighborhood, Anne showed us a mob of wild kangaroos. We saw them from a distance, laying in the sun for their afternoon nap while a few hopped around. It was my hope to see these and the other native animals to AU and the following day Anne took us to Moonlite Sanctuary where we saw kangaroos, koalas, wallabies and kookaburas. How many years have I heard about these animals and finally seeing them up close and feeding some of them was a treat.

We spent one night at their beach house in Somers, walking to see sunset at night and then a nice beach walk the following morning. Our taste of Melbourne through the eyes of Anne and Michael is outstanding.
Soon we were off to the next family - Lauren, Ra'naan and their children. We met these folks on a train in Spain on the way to Granada in 2015 and spent several days together touring that city. As happens, we made friends and they said that if we ever come to Melbourne that we should visit and that has come true. BTW, it is Lauren who used my drawings for a large installation to thank the financial advisors in Australia at their annual convention last year. It was quite an honor to have my drawings hanging all over the "Garden of Gratitude".

Again we enjoyed being with a family which has given us much information about their lives, their work and visiting some of their favorite places. Lauren and her family live in Malvern and we were able to travel from their home by tram into the city on our last day for a walking tour, catching all the details that we hadn't heard about in our first 9 days.

We walked in the Dandenog National Park seeing the gum (Eucalyptus) trees and fern trees and a chance to go to Abbotsford Convent, a former convent now art community with galleries, studios, gardens and restaurants - a community experience.

To both our "Bestie Families" - big thanks for your amazing hospitality and generosity and we hope to reciprocate when you visit us in Mexico. Muchisimas gracias amigos.

And from Ricardo....
Here we are in Australia for 3 weeks. We are now in Melbourne living with good friends, both north and south of the river that divides this city. Both families are of different generations, one being Generation X and the other are Baby Boomers like us. I always like having people around me and these two families have given us not just good friendship but an opportunity to share with us their families and stories of their past. We have much in common such as travel and adventure.

Melbourne is city that is growing in population and has the same growing pains as one finds in other cities. Melbourne is known as the arts and cultural center of Australia and we have seen art from aboriginal times to the present as well as a night at the theater. The country is open to tell their stories and history concerning the past tragedies with the native peoples called the First People. I have come to see that our past tragedies mirror theirs.
We just arrived in Sydney and then heading north along the coast to a few more places so stay tuned.